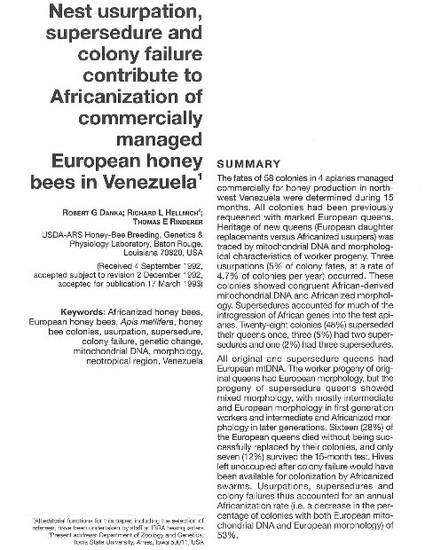 The fates of 58 colonies in 4 apiaries managed commercially for honey production in northwest Venezuela were determined during 15 months. All colonies had been previously requeened with marked European queens. Heritage of new queens (European daughter replacements versus Africanized usurpers) was traced by mitochondrial DNA and morphological characteristics of worker progeny. Three usurpations (5% of colony fates, at a rate of 4.7% of colonies per year) occurred. These colonies showed congruent African-derived mitochondrial DNA and Africanized morphology. Supersedures accounted for much of the introgression of African genes into the test apiaries. Twenty-eight colonies (48%) superseded their queens once, three (5%) had two supersedures and one (2%) had three supersedures. All original and supersedure queens had European mtDNA. The worker progeny of original queens had European morphology, but the progeny of supersedure queens showed mixed morphology, with mostly intermediate and European morphology in first generation workers and intermediate and Africanized morphology in later generations. Sixteen (28%) of the European queens died without being successfully replaced by their colonies, and only seven (12%) survived the 15-month test. Hives left unoccupied after colony failure would have been available for colonization by Africanized swarms. Usurpations, supersedures and colony failures thus accounted for an annual Africanization rate (i.e. a decrease in the percentage of colonies with both European mitochondrial DNA and European morphology) of 53%.

Keywords
Disciplines
Publication Date
Publisher Statement
Works produced by employees of the U.S. Government as part of their official duties are not copyrighted within the U.S. The content of this document is not copyrighted.
Citation Information
Robert G. Danka, Richard L Hellmich and Thomas E. Rinderer. "Nest usurpation, supersedure and colony failure contribute to Africanization of commercially managed European honey bees in Venezuela" Journal of Apicultural Research Vol. 31 Iss. 3/4 (1992)
Available at: http://works.bepress.com/richard_hellmich/115/