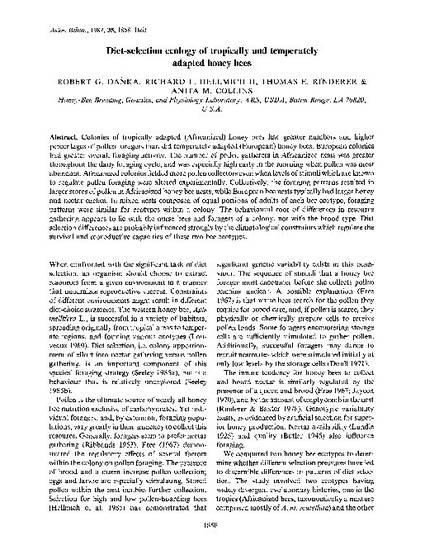 Colonies of tropically adapted (Africanized) honey bees had greater numbers and higher percentages of pollen foragers than did temperately adapted (European) honey bees. European colonies had greater overall foraging activity. The number of pollen gatherers in Africanized nests was greater throughout the daily foraging cycle, and was especially high early in the morning when pollen was most abundant. Africanized colonies fielded more pollen collectors even when levels of stimuli which are known to regulate pollen foraging were altered experimentally. Collectively, the foraging patterns resulted in larger stores of pollen in Africanized honey bee nests, while European bee nests typically had larger honey and nectar caches. In mixed nests composed of equal portions of adults of each bee ecotype, foraging patterns were similar for ecotypes within a colony. The behavioural root of differences in resource gathering appears to lie with the nurse bees and foragers of a colony, not with the brood type. Diet selection differences are probably influenced strongly by the climatological constraints which regulate the survival and reproductive capacities of these two bee ecotypes.