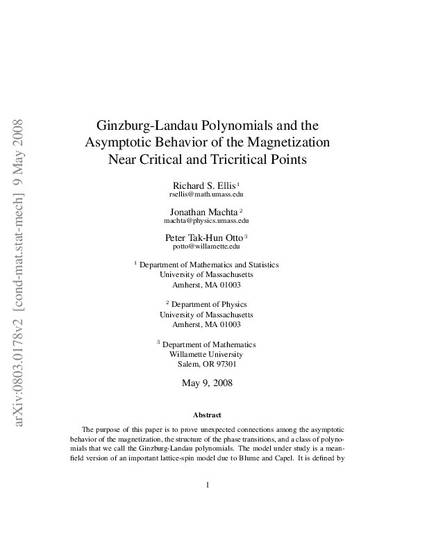 The purpose of this paper is to prove connections among the asymptotic behavior of the magnetization, the structure of the phase transitions, and a class of polynomials that we call the Ginzburg–Landau polynomials. The model under study is a mean-field version of a lattice spin model due to Blume and Capel. It is defined by a probability distribution that depends on the parameters β and K, which represent, respectively, the inverse temperature and the interaction strength. Our main focus is on the asymptotic behavior of the magnetization m(β n ,K n ) for appropriate sequences (β n ,K n ) that converge to a second-order point or to the tricritical point of the model and that lie inside various subsets of the phase-coexistence region. The main result states that as (β n ,K n ) converges to one of these points (β,K), m(bn,Kn) ~ [`(x)]|b-bn|g® 0m(nKn)x−n0 . In this formula γ is a positive constant, and [`(x)]x is the unique positive, global minimum point of a certain polynomial g. We call g the Ginzburg–Landau polynomial because of its close connection with the Ginzburg–Landau phenomenology of critical phenomena. For each sequence the structure of the set of global minimum points of the associated Ginzburg–Landau polynomial mirrors the structure of the set of global minimum points of the free-energy functional in the region through which (β n ,K n ) passes and thus reflects the phase-transition structure of the model in that region. This paper makes rigorous the predictions of the Ginzburg–Landau phenomenology of critical phenomena and the tricritical scaling theory for the mean-field Blume–Capel model.