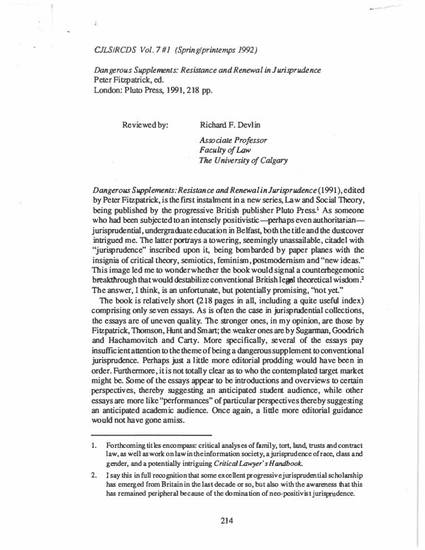 Dangerous Supplements: Resistance and Renewal in Jurisprudence (1991 ), edited by Peter Fitzpatrick, is the first instalment in a new series, Law and Social Theory, being published by the progressive British publisher Pluto Press. As someone who had been subjected to an intensely positivistic- perhaps even authoritarian- jurisprudential, undergraduate education in Belfast, both the title and the dustcover intrigued me. The latter portrays a towering, seemingly unassailable, citadel with "jurisprudence" inscribed upon it, being bombarded by paper planes with the insignia of critical theory, semiotics, feminism, postmodernism and "new ideas." This image led me to wonder whether the book would signal a counterhegemonic breakthrough that would destabilize conventional British legal theoretical wisdom. The answer, I think, is an unfortunate, but potentially promising, "not yet."