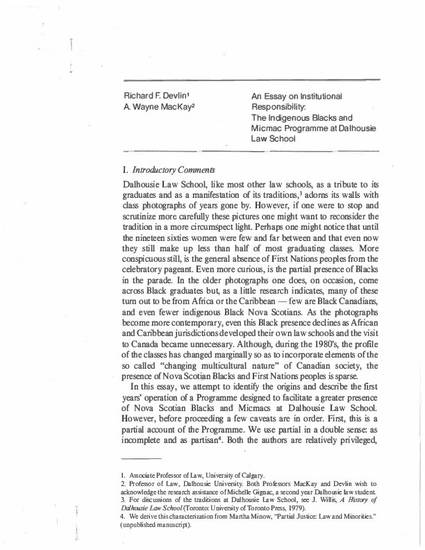 Dalhousie Law School, like most other law schools, as a tribute to its graduates and as a manifestation of its traditions, adorns its walls with class photographs of years gone by. However, if one were to stop and scrutinize more carefully these pictures one might want to reconsider the tradition in a more circumspect light. Perhaps one might notice that until the nineteen sixties women were few and far between and that even now they still make up less than half of most graduating classes. More conspicuous still, is the general absence of First Nations peoples from the celebratory pageant. Even more curious, is the partial presence of Blacks in the parade. In the older photographs one does, on occasion, come across Black graduates but, as a little research indicates, many of these turn out to be from Africa or the Caribbean - few are Black Canadians, and even fewer indigenous Black Nova Scotians. As the photographs become more contemporary, even this Black presence declines as African and Caribbean jurisdictions developed their own law schools and the visit to Canada became unnecessary. Although, during the 1980's, the profile of the classes has changed marginally so as to incorporate elements of the so called "changing multicultural nature" of Canadian society, the presence of Nova Scotian Blacks and First Nations peoples is sparse.