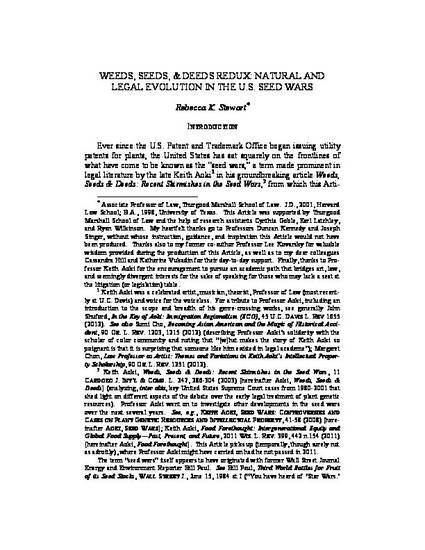 Ever since the U.S. Patent and Trademark Office began issuing utility patents for plants, the United States has sat squarely on the frontlines of what have come to be known as the “seed wars.” In the last two decades, the majority of battles in the U.S. seed wars have been waged in the form of patent infringement lawsuits. Typically these suits are filed by biotechnology corporations such as Monsanto against farmers accused of saving and planting patented seed that self-replicates to produce progeny embodying—and thus infringing—the biotech corporations’ patented inventions.

Yet in recent years, the seed wars have begun to evolve. Not only has nature itself taken on a starring role, waging its own weed-fueled battle against the territorial creep of big biotech’s intellectual property interests, but so have farmers, who previously stood only on the defensive end of the seed wars, struggling to protect their rights to use traditional agricultural practices that have been observed for millennia. This Article looks at current developments in the seed wars through the lens of these two major shifts by examining the ways in which both nature and farmers have started to fight back, as well as the results of their labors. In so doing, the Article provides an in-depth critique of the Federal Circuit’s most recent effort to ignore the pressing voice of nature and to thwart farmers’ attempts to regain some of the rights that they have lost as corporate interests have taken control of what was once a free and common American resource: the life embodied in a seed.