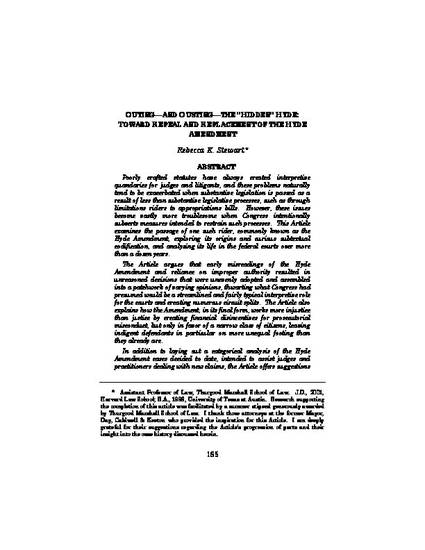 Article
Outing-- and Ousting-- the "Hidden" Hyde: Toward Repeal and Replacement of the Hyde Amendment
Rutgers Law Review (2012)
Download
Abstract

Poorly crafted statutes have always created interpretive quandaries for judges and litigants, and these problems naturally tend to be exacerbated when substantive legislation is passed as a result of less than substantive legislative processes, such as through limitations riders to appropriations bills. However, these issues become vastly more troublesome when Congress intentionally subverts measures intended to restrain such processes. This Article examines the passage of one such rider, commonly known as the Hyde Amendment, exploring its origins and curious subtextual codification, and analyzing its life in the federal courts over more than a dozen years.

The Article argues that early misreadings of the Hyde Amendment and reliance on improper authority resulted in unreasoned decisions that were unevenly adopted and assembled into a patchwork of varying opinions, thwarting what Congress had presumed would be a streamlined and fairly typical interpretive role for the courts and creating numerous circuit splits. The Article also explains how the Amendment, in its final form, works more injustice than justice by creating financial disincentives for prosecutorial misconduct, but only in favor of a narrow class of citizens, leaving indigent defendants in particular on more unequal footing than they already are.

In addition to laying out a categorical analysis of the Hyde Amendment cases decided to date, intended to assist judges and practitioners dealing with new claims, the Article offers suggestions for remedying the ongoing quagmire. These range from detailed suggestions on how legislators could revise the Amendment to the Article’s ultimate call for the statute’s repeal and substitution with measures that will more likely effectuate its goals, eliminating its current discriminatory effect and bringing about more justice for all citizens.