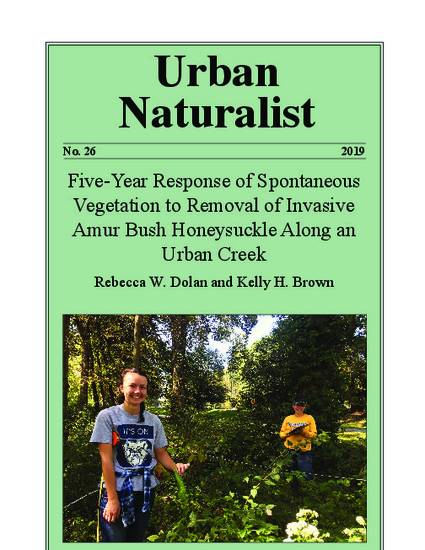 Non-native invasive species have major impacts on landscapes worldwide, but their effects in urban areas are not well documented. We quantified the response of naturally regenerating vegetation along an urban creek to removal of the invasive shrub Lonicera maackii (Amur Bush Honeysuckle). Over the 5-year study, species richness more than doubled. Most new plants were native, disturbance-adapted, early successional species. Trend analysis of function traits revealed annuals that rely on seed dispersal by wind or externally on animals were significantly overrepresented among new plants in comparison to their proportion in the countywide species pool. Increased species richness did not result in improved habitat quality, as indicated by Floristic Quality Assessment. Eight new invasive species appeared over the course of the study. Active management of this site may be needed in perpetuity

This article was archived with permission from Eagle Hill Institute, all rights reserved. Document also available from Urban Naturalist.