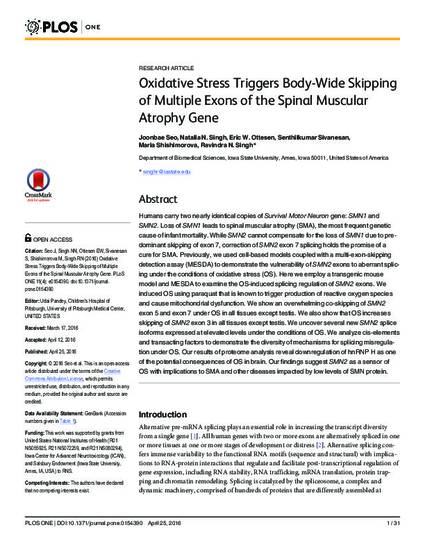 Humans carry two nearly identical copies of Survival Motor Neuron gene: SMN1 and SMN2. Loss of SMN1 leads to spinal muscular atrophy (SMA), the most frequent genetic cause of infant mortality. While SMN2 cannot compensate for the loss of SMN1 due to predominant skipping of exon 7, correction of SMN2 exon 7 splicing holds the promise of a cure for SMA. Previously, we used cell-based models coupled with a multi-exon-skipping detection assay (MESDA) to demonstrate the vulnerability of SMN2 exons to aberrant splicing under the conditions of oxidative stress (OS). Here we employ a transgenic mouse model and MESDA to examine the OS-induced splicing regulation of SMN2 exons. We induced OS using paraquat that is known to trigger production of reactive oxygen species and cause mitochondrial dysfunction. We show an overwhelming co-skipping of SMN2 exon 5 and exon 7 under OS in all tissues except testis. We also show that OS increases skipping of SMN2 exon 3 in all tissues except testis. We uncover several new SMN2 splice isoforms expressed at elevated levels under the conditions of OS. We analyze cis-elements and transacting factors to demonstrate the diversity of mechanisms for splicing misregulation under OS. Our results of proteome analysis reveal downregulation of hnRNP H as one of the potential consequences of OS in brain. Our findings suggest SMN2 as a sensor of OS with implications to SMA and other diseases impacted by low levels of SMN protein.