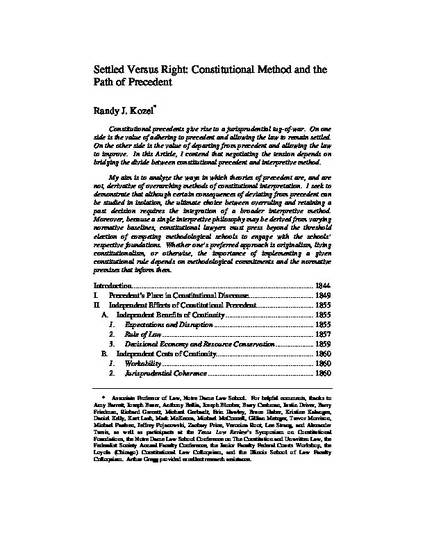 Constitutional precedents give rise to a jurisprudential tug-of-war. On one side is the value of adhering to precedent and allowing the law to remain settled. On the other side is the value of departing from precedent and allowing the law to improve. In this Article, I contend that negotiating the tension depends on bridging the divide between constitutional precedent and interpretive method. My aim is to analyze the ways in which theories of precedent are, and are not, derivative of overarching methods of constitutional interpretation. I seek to demonstrate that although certain consequences of deviating from precedent can be studied in isolation, the ultimate choice between overruling and retaining a past decision requires the integration of a broader interpretive method. Moreover, because a single interpretive philosophy may be derived from varying normative baselines, constitutional lawyers must press beyond the threshold election of competing methodological schools to engage with the schools’ respective foundations. Whether one’s preferred approach is originalism, living constitutionalism, or otherwise, the importance of implementing a given constitutional rule depends on methodological commitments and the normative premises that inform them.