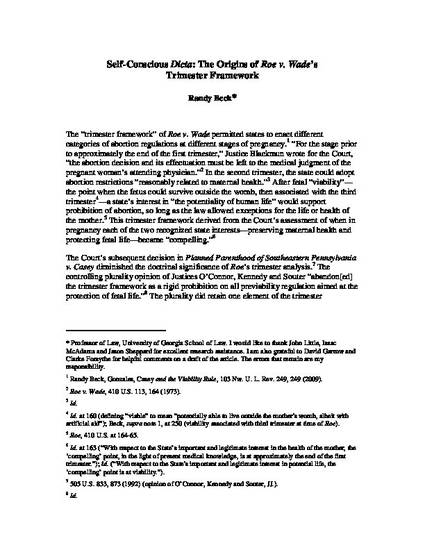 One of the controversies arising from Roe v. Wade (1973) has concerned whether the conclusions undergirding the opinion's “trimester framework” should be considered part of the holding of the case, or instead classified as dicta. Different Supreme Court opinions have spoken to this question in different ways. This article reviews materials from the files of Justices who participated in Roe, seeking insight as to what the Court thought about the issue at the time.

The article concludes that Justices in the Roe majority understood the opinion’s trimester framework to consist largely of dicta, unnecessary to a ruling on the constitutionality of the Texas abortion statute. The extensive use of dicta in Roe can be attributed to a desire to provide guidance to state legislators and perhaps a hope of reducing the number of abortion cases the Court would need to address in future terms.

The manuscript considers whether the Court might have done well to wait for a case raising the issue of the duration of abortion rights. If the parties had litigated the question in the lower courts, the Justices presumably would have enjoyed the benefits of a full record and plenary briefing. This might have raised questions about the asserted “logical and biological justifications” for the viability rule (one element of the trimester framework), or better equipped the Court to justify the rule in constitutional terms.