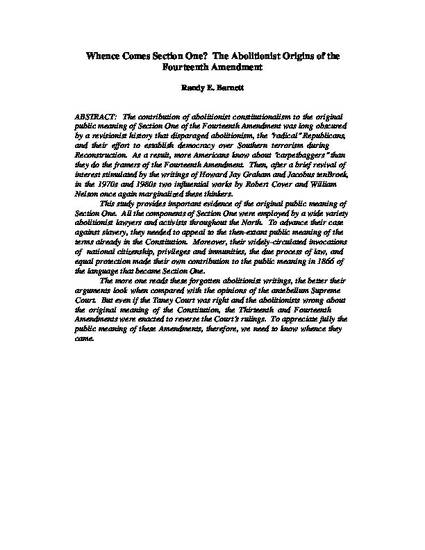 The contribution of abolitionist constitutionalism to the original public meaning of Section One of the Fourteenth Amendment was long obscured by a revisionist history that disparaged abolitionism, the “radical” Republicans, and their effort to establish democracy over Southern terrorism during Reconstruction. As a result, more Americans know about “carpetbaggers” than they do the framers of the Fourteenth Amendment. Then, after a brief revival of interest stimulated by the writings of Howard Jay Graham and Jacobus tenBroek, in the 1970s and 1980s two influential works by Robert Cover and William Nelson once again marginalized these thinkers.

This study provides important evidence of the original public meaning of Section One. All the components of Section One were employed by a wide variety abolitionist lawyers and activists throughout the North. To advance their case against slavery, they needed to appeal to the then-extant public meaning of the terms already in the Constitution. Moreover, their widely-circulated invocations of national citizenship, privileges and immunities, the due process of law, and equal protection made their own contribution to the public meaning in 1866 of the language that became Section One.

The more one reads these forgotten abolitionist writings, the better their arguments look when compared with the opinions of the antebellum Supreme Court. But even if the Taney Court was right and the abolitionists wrong about the original meaning of the Constitution, the Thirteenth and Fourteenth Amendments were enacted to reverse the Court’s rulings. To appreciate fully the public meaning of these Amendments, therefore, we need to know whence they came.