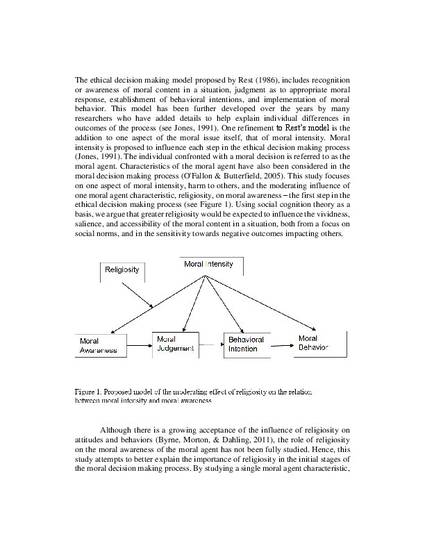 The study investigated the importance of religiosity in the moral decision making process. Using social cognition theory as a basis, we proposed that greater religiosity would be expected to influence the vividness, salience, and accessibility of the moral content in a situation, both from a focus on social norms, and in the sensitivity towards negative outcomes impacting others. We used a random block, mixed quasi-experimental design, with both within-subjects and between-subjects components. Moral intensity was manipulated in high and low harm conditions for four ethical scenarios presented. Completed surveys were returned by 372 adult respondents (average age = 47). Findings indicate that intrinsic religiosity moderated the relation between moral intensity and moral awareness, such that those who are more intrinsically religious were found to have higher levels of moral awareness at lower levels of moral intensity. Individuals with low reported levels of intrinsic religiosity were less likely to recognize the moral component of a low harm situation. Extrinsic religiosity was not found to be a significant moral agent characteristic when considering the relation between harm to others and moral awareness. The results of this study add to the understanding of how characteristics of the moral issue interact with characteristics of the moral agent to impact moral awareness.

Citation Information
Randi L Sims and George D. Bingham. "The Moderating Effect of Religiosity on the Relation Between Moral Intensity and Moral Awareness"
Available at: http://works.bepress.com/randi-sims/84/