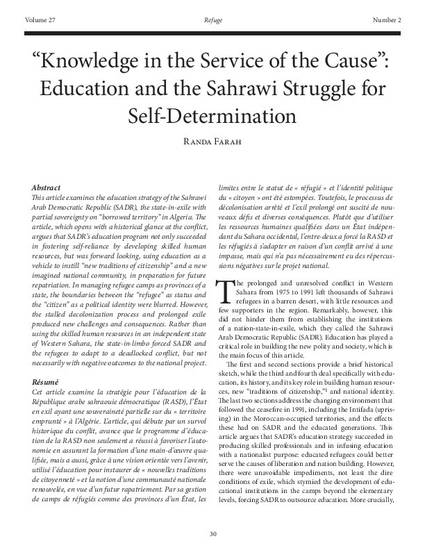 Article
“Knowledge in the Service of the Cause”:Education and the Sahrawi Struggle for Self-Determination
Refuge (2010)
Download Find in your library
Abstract

This article examines the education strategy of the Sahrawi Arab Democratic Republic (SADR), the state-in-exile with partial sovereignty on “borrowed territory” in Algeria. The article, which opens with a historical glance at the conflict, argues that SADR’s education program not only succeeded in fostering self-reliance by developing skilled human resources, but was forward looking, using education as a vehicle to instill “new traditions of citizenship” and a new imagined national community, in preparation for future repatriation. In managing refugee camps as provinces of a state, the boundaries between the “refugee” as status and the “citizen” as a political identity were blurred. However, the stalled decolonization process and prolonged exile produced new challenges and consequences. Rather than using the skilled human resources in an independent state of Western Sahara, the state-in-limbo forced SADR and the refugees to adapt to a deadlocked conflict, but not necessarily with negative outcomes to the national project.