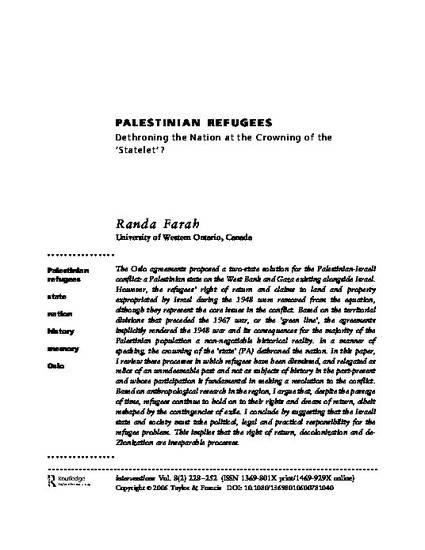 Article
PALESTINIAN REFUGEES: Dethroning the Nation at the Crowing of the 'Statelet'
Interventions (2006)
Download Find in your library
Abstract

The Oslo agreements proposed a two-state solution for the Palestinian-Israeli conflict: a Palestinian state on the West Bank and Gaza existing alongside Israel. However, the refugees’ right of return and claims to land and property expropriated by Israel during the 1948 were removed from the equation, although they represent the core issues in the conflict. Based on the territorial divisions that preceded the 1967 war, or the ‘green line’, the agreements implicitly rendered the 1948 war and its consequences for the majority of the Palestinian population a non-negotiable historical reality. In a manner of speaking, the crowning of the ‘state’ (PA) dethroned the nation. In this paper, I review these processes in which refugees have been dismissed, and relegated as relics of an unredeemable past and not as subjects of history in the past-present and whose participation is fundamental in seeking a resolution to the conflict. Based on anthropological research in the region, I argue that, despite the passage of time, refugees continue to hold on to their rights and dream of return, albeit reshaped by the contingencies of exile. I conclude by suggesting that the Israeli state and society must take political, legal and practical responsibility for the refugee problem. This implies that the right of return, decolonization and de- Zionization are inseparable processes

Keywords
Disciplines
Publication Date
Publisher Statement
Dear Ms. Farah: I am sending a gratis permission for your use of your article in the university's web site. Thank you. Mary Ann Muller - Permissions Coordinator, US Journals Division
Citation Information
Randa R Farah. "PALESTINIAN REFUGEES: Dethroning the Nation at the Crowing of the 'Statelet'" Interventions Vol. 8 Iss. 2 (2006)
Available at: http://works.bepress.com/randa_farah/10/