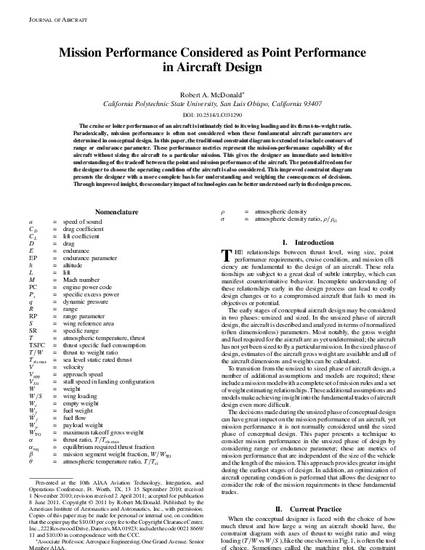 The cruise or loiter performance of an aircraft is intimately tied to its wing loading and its thrust-to-weight ratio. Paradoxically, mission performance is often not considered when these fundamental aircraft parameters are determined in conceptual design. In this paper, the traditional constraint diagram is extended to include contours of range or endurance parameter. These performance metrics represent the mission-performance capability of the aircraft without sizing the aircraft to a particular mission. This gives the designer an immediate and intuitive understanding of the tradeoff between the point and mission performance of the aircraft. The potential freedom for the designer to choose the operating condition of the aircraft is also considered. This improved constraint diagram presents the designer with a more complete basis for understanding and weighing the consequences of decisions. Through improved insight, the secondary impact of technologies can be better understood early in the design process.