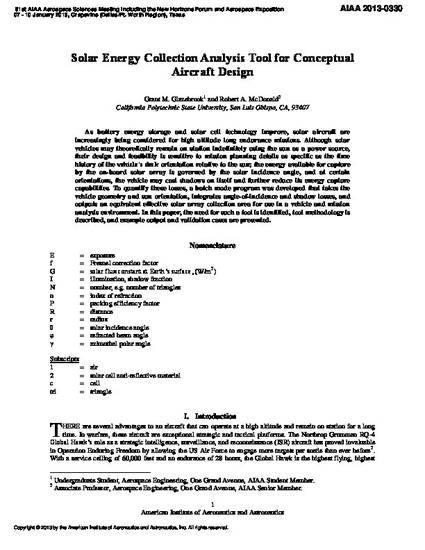 As battery energy storage and solar cell technology improve, solar aircraft are increasingly being considered for high altitude long endurance missions. Although solar vehicles may theoretically remain on station indefinitely using the sun as a power source, their design and feasibility is sensitive to mission planning details as specific as the time history of the vehicle’s deck orientation relative to the sun; the energy available for capture by the on-board solar array is governed by the solar incidence angle, and at certain orientations, the vehicle may cast shadows on itself and further reduce its energy capture capabilities. To quantify these losses, a batch mode program was developed that takes the vehicle geometry and sun orientation, integrates angle-of-incidence and shadow losses, and outputs an equivalent effective solar array collection area for use in a vehicle and mission analysis environment. In this paper, the need for such a tool is identified, tool methodology is described, and example output and validation cases are presented.