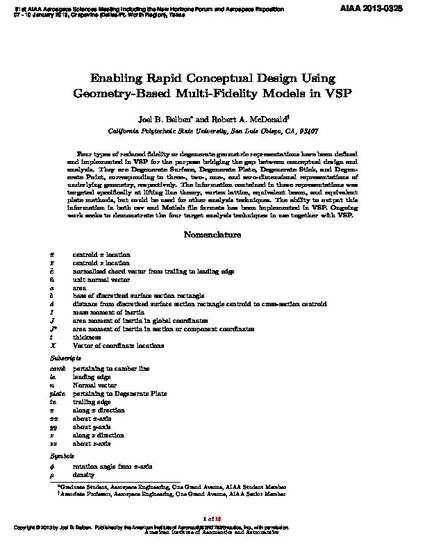 Four types of reduced fidelity or degenerate geometric representations have been defined and implemented in VSP for the purpose bridging the gap between conceptual design and analysis. They are Degenerate Surface, Degenerate Plate, Degenerate Stick, and Degenerate Point, corresponding to three-, two-, one-, and zero-dimensional representations of underlying geometry, respectively. The information contained in these representations was targeted specifically at lifting line theory, vortex lattice, equivalent beam, and equivalent plate methods, but could be used for other analysis techniques. The ability to output this information in both csv and Matlab file formats has been implemented in VSP. Ongoing work seeks to demonstrate the four target analysis techniques in use together with VSP.