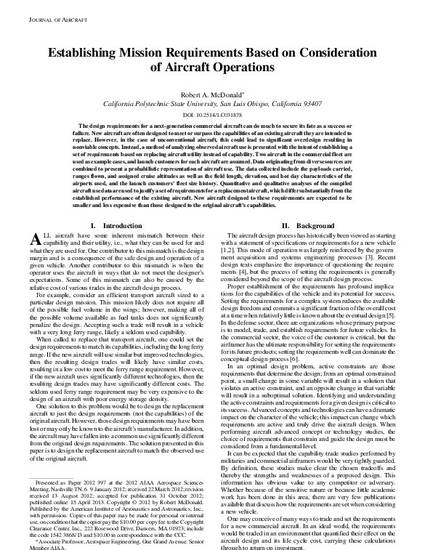 The design requirements for a next-generation commercial aircraft can do much to secure its fate as a success or failure. New aircraft are often designed to meet or surpass the capabilities of an existing aircraft they are intended to replace. However, in the case of unconventional aircraft, this could lead to significant overdesign resulting in nonviable concepts. Instead, a method of analyzing observed aircraft use is presented with the intent of establishing a set of requirements based on replacing aircraft utility instead of capability. Two aircraft in the commercial fleet are used as example cases, and launch customers for each aircraft are assumed. Data originating from diverse sources are combined to present a probabilistic representation of aircraft use. The data collected include the payloads carried, ranges flown, and assigned cruise altitudes as well as the field length, elevation, and hot day characteristics of the airports used, and the launch customers’ fleet size history. Quantitative and qualitative analyses of the compiled aircraft use data are used to justify a set of requirements for a replacement aircraft, which differ substantially from the established performance of the existing aircraft. New aircraft designed to these requirements are expected to be smaller and less expensive than those designed to the original aircraft’s capabilities. Read More: http://arc.aiaa.org/doi/full/10.2514/1.C031878