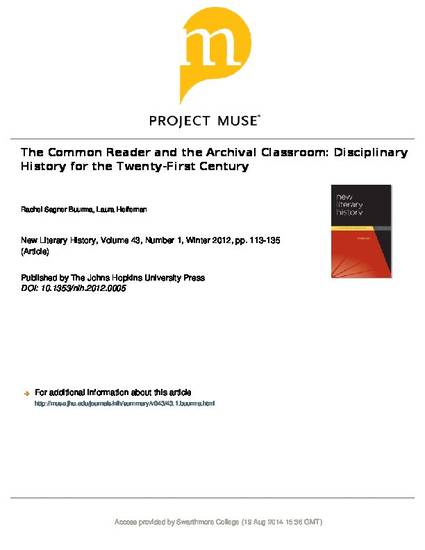 Article
The Common Reader And The Archival Classroom: Disciplinary History For The Twenty-First Century
New Literary History
Download Find in your library
Document Type
Article
Publication Date
Disciplines
Abstract
The essay draws on archival research to reconstruct the midcentury classrooms of Cleanth Brooks and Edmund Wilson. Our description of these classrooms - the participants, texts, and the exemplary as well as the undertheorized moments gathered within them - dissolves the divisions between research and teaching, historicist and formalist methods, skeptical critics and invested common readers, disciplinary spaces and public ones, that have particularly plagued the discipline of English in recent years. In Brooks's classroom - long figured as a foundational site for our discipline - we draw out, alongside Brooks's strong theory of the marginal and rarified status of the literary, an array of alternate ways of attending and valuing literature's connections to the world rather than its autonomy from it. In Wilson's classrooms, we see how Wilson's historicist research creates its own aesthetic and mode of value - one that links texts to life experience rather than sanctifying them within a timeless canon, one that sees literary value accrue to texts as they are read and interpreted over time by varying readerships. Like Wilson, we seek to practice an historicism that is critical and yet not only critical - one that turns to the least valued aspect of our discipline's past in order to imagine possible futures for English.
Comments