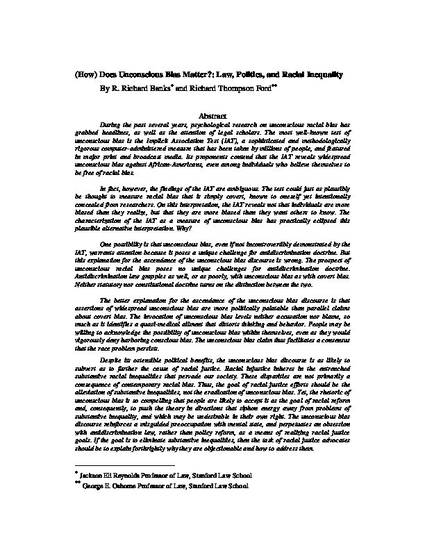 During the past several years, psychological research on unconscious racial bias has grabbed headlines, as well as the attention of legal scholars. The most well-known test of unconscious bias is the Implicit Association Test (IAT), a sophisticated and methodologically rigorous computer-administered measure that has been taken by millions of people, and featured in major print and broadcast media. Its proponents contend that the IAT reveals widespread unconscious bias against African-Americans, even among individuals who believe themselves to be free of racial bias.

In fact, however, the findings of the IAT are ambiguous. The test could just as plausibly be thought to measure racial bias that is simply covert, known to oneself yet intentionally concealed from researchers. On this interpretation, the IAT reveals not that individuals are more biased than they realize, but that they are more biased than they want others to know. The characterization of the IAT as a measure of unconscious bias has practically eclipsed this plausible alternative interpretation. Why?