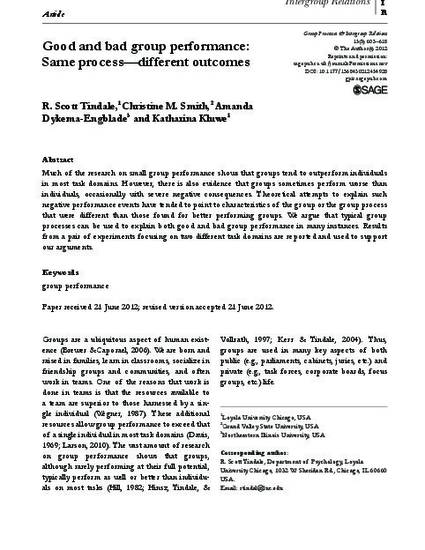 Article
Good and Bad Group Performance: Same Process—Different Outcomes
Peer Reviewed Articles
Download
Publication Date
Keywords
Disciplines
Abstract
Much of the research on small group performance shows that groups tend to outperform individuals in most task domains. However, there is also evidence that groups sometimes perform worse than individuals, occasionally with severe negative consequences. Theoretical attempts to explain such negative performance events have tended to point to characteristics of the group or the group process that were different than those found for better performing groups. We argue that typical group processes can be used to explain both good and bad group performance in many instances. Results from a pair of experiments focusing on two different task domains are reported and used to support our arguments.
Comments