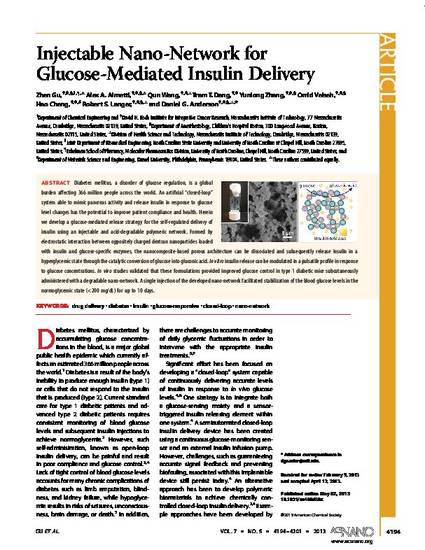 Diabetes mellitus, a disorder of glucose regulation, is a global burden affecting 366 million people across the world. An artificial “closed-loop” system able to mimic pancreas activity and release insulin in response to glucose level changes has the potential to improve patient compliance and health. Herein we develop a glucose-mediated release strategy for the self-regulated delivery of insulin using an injectable and acid-degradable polymeric network. Formed by electrostatic interaction between oppositely charged dextran nanoparticles loaded with insulin and glucose-specific enzymes, the nanocomposite-based porous architecture can be dissociated and subsequently release insulin in a hyperglycemic state through the catalytic conversion of glucose into gluconic acid. In vitro insulin release can be modulated in a pulsatile profile in response to glucose concentrations. In vivo studies validated that these formulations provided improved glucose control in type 1 diabetic mice subcutaneously administered with a degradable nano-network. A single injection of the developed nano-network facilitated stabilization of the blood glucose levels in the normoglycemic state (<200 mg/dL) for up to 10 days.