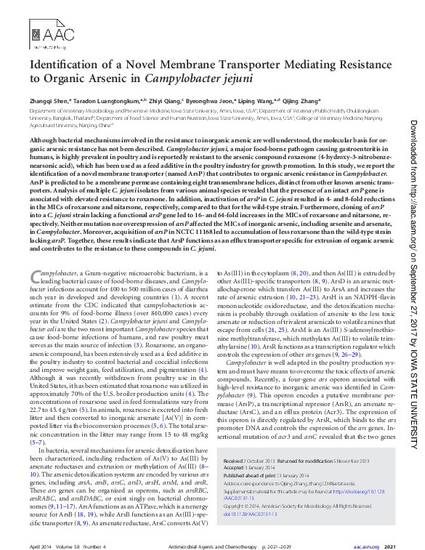 Although bacterial mechanisms involved in the resistance to inorganic arsenic are well understood, the molecular basis for organic arsenic resistance has not been described. Campylobacter jejuni, a major food-borne pathogen causing gastroenteritis in humans, is highly prevalent in poultry and is reportedly resistant to the arsenic compound roxarsone (4-hydroxy-3-nitrobenzenearsonic acid), which has been used as a feed additive in the poultry industry for growth promotion. In this study, we report the identification of a novel membrane transporter (named ArsP) that contributes to organic arsenic resistance in Campylobacter. ArsP is predicted to be a membrane permease containing eight transmembrane helices, distinct from other known arsenic transporters. Analysis of multiple C. jejuni isolates from various animal species revealed that the presence of an intact arsP gene is associated with elevated resistance to roxarsone. In addition, inactivation of arsP in C. jejuni resulted in 4- and 8-fold reductions in the MICs of roxarsone and nitarsone, respectively, compared to that for the wild-type strain. Furthermore, cloning of arsP into a C. jejuni strain lacking a functional arsP gene led to 16- and 64-fold increases in the MICs of roxarsone and nitarsone, respectively. Neither mutation nor overexpression of arsP affected the MICs of inorganic arsenic, including arsenite and arsenate, in Campylobacter. Moreover, acquisition of arsP in NCTC 11168 led to accumulation of less roxarsone than the wild-type strain lacking arsP. Together, these results indicate that ArsP functions as an efflux transporter specific for extrusion of organic arsenic and contributes to the resistance to these compounds in C. jejuni.