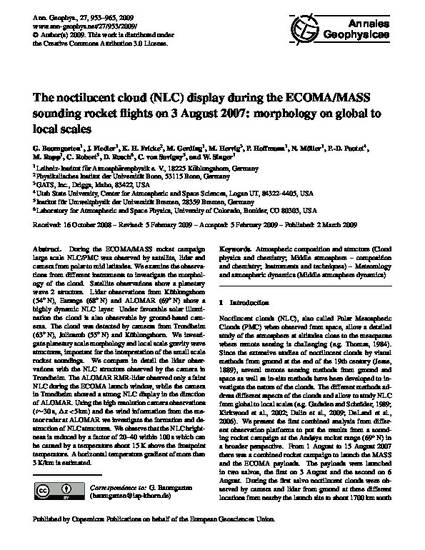 During the ECOMA/MASS rocket campaign large scale NLC/PMC was observed by satellite, lidar and camera from polar to mid latitudes. We examine the observations from different instruments to investigate the morphology of the cloud. Satellite observations show a planetary wave 2 structure. Lidar observations from Kühlungsborn (54° N), Esrange (68° N) and ALOMAR (69° N) show a highly dynamic NLC layer. Under favorable solar illumination the cloud is also observable by ground-based cameras. The cloud was detected by cameras from Trondheim (63° N), Juliusruh (55° N) and Kühlungsborn. We investigate planetary scale morphology and local scale gravity wave structures, important for the interpretation of the small scale rocket soundings. We compare in detail the lidar observations with the NLC structure observed by the camera in Trondheim. The ALOMAR RMR-lidar observed only a faint NLC during the ECOMA launch window, while the camera in Trondheim showed a strong NLC display in the direction of ALOMAR. Using the high resolution camera observations (t~30 s, Δx<5 >km) and the wind information from the meteor radar at ALOMAR we investigate the formation and destruction of NLC structures. We observe that the NLC brightness is reduced by a factor of 20–40 within 100 s which can be caused by a temperature about 15 K above the frostpoint temperature. A horizontal temperature gradient of more than 3 K/km is estimated.