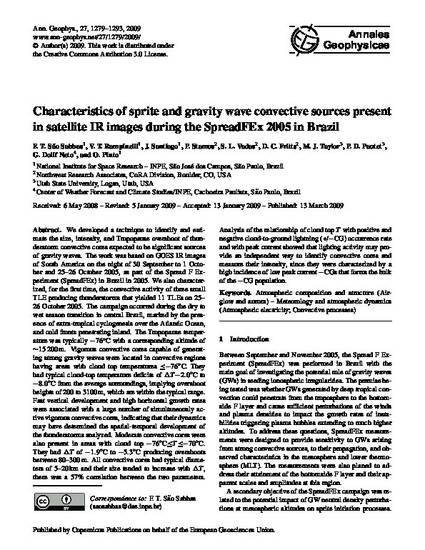 We developed a technique to identify and estimate the size, intensity, and Tropopause overshoot of thunderstorm convective cores expected to be significant sources of gravity waves. The work was based on GOES IR images of South America on the night of 30 September to 1 October and 25–26 October 2005, as part of the Spread F Experiment (SpreadFEx) in Brazil in 2005. We also characterized, for the first time, the convective activity of three small TLE producing thunderstorms that yielded 11 TLEs on 25–26 October 2005. The campaign occurred during the dry to wet season transition in central Brazil, marked by the presence of extra-tropical cyclogenesis over the Atlantic Ocean, and cold fronts penetrating inland. The Tropopause temperature was typically −76°C with a corresponding altitude of ~15 200 m. Vigorous convective cores capable of generating strong gravity waves were located in convective regions having areas with cloud top temperatures ≤−76°C. They had typical cloud-top temperature deficits of ΔT−2.0°C to −8.0°C from the average surroundings, implying overshoot heights of 200 to 3100 m, which are within the typical range. Fast vertical development and high horizontal growth rates were associated with a large number of simultaneously active vigorous convective cores, indicating that their dynamics may have determined the spatial-temporal development of the thunderstorms analyzed. Moderate convective cores were also present in areas with cloud top −76°C≤T≤−70°C. They had ΔT of −1.9°C to −5.3°C producing overshoots between 80–300 m. All convective cores had typical diameters of 5–20 km and their size tended to increase with ΔT, there was a 57% correlation between the two parameters. Analysis of the relationship of cloud top T with positive and negative cloud-to-ground lightning (+/−CG) occurrence rate and with peak current showed that lighting activity may provide an independent way to identify convective cores and measure their intensity, since they were characterized by a high incidence of low peak current −CGs that forms the bulk of the −CG population.