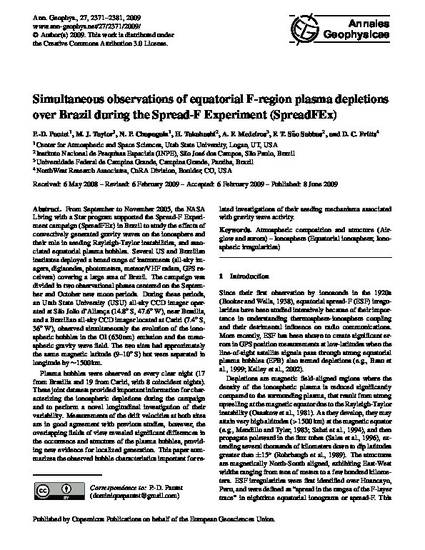 During the Spread F Experiment campaign, under NASA Living with a Star (LWS) program, carried out in the South American Magnetic Equator region from 22 September to 8 November 2005, two airglow CCD imagers, located at Cariri (7.4° S, 36.5° W, geomag. 11° S) and near Brasilia (14.8° S, 47.6° W, geomag. 10° S) were operated simultaneously and measured the equatorial ionospheric bubbles and their time evolution by monitoring the airglow OI 6300 intensity depletions. Simultaneous observation of the mesospheric OH wave structures made it possible to investigate the relationship between the bubble formation in the ionosphere and the gravity wave activity at around 90 km. On the evening of 30 September 2005, comb-like OI 6300 depletions with a distance of ~130 km between the adjacent ones were observed. During the same period, a mesospheric gravity wave with a horizontal wavelength of ~130 km was observed. From the 17 nights of observation during the campaign period, there was a good correlation between the OI 6300 depletion distances and the gravity wave horizontal wavelengths in the mesosphere with a statistically significant level, suggesting a direct contribution of the mesospheric gravity wave to plasma bubble seeding in the equatorial ionosphere.