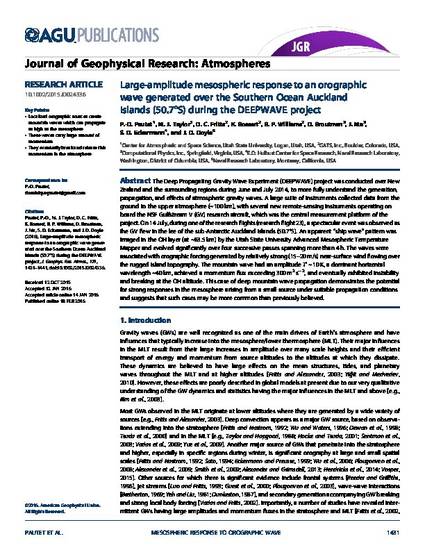 The Deep Propagating Gravity Wave Experiment (DEEPWAVE) project was conducted over New Zealand and the surrounding regions during June and July 2014, to more fully understand the generation, propagation, and effects of atmospheric gravity waves. A large suite of instruments collected data from the ground to the upper atmosphere (~100 km), with several new remote-sensing instruments operating on board the NSF Gulfstream V (GV) research aircraft, which was the central measurement platform of the project. On 14 July, during one of the research flights (research flight 23), a spectacular event was observed as the GV flew in the lee of the sub-Antarctic Auckland Islands (50.7°S). An apparent "ship wave" pattern was imaged in the OH layer (at ~83.5 km) by the Utah State University Advanced Mesospheric Temperature Mapper and evolved significantly over four successive passes spanning more than 4 h. The waves were associated with orographic forcing generated by relatively strong (15-20 m/s) near-surface wind flowing over the rugged island topography. The mountain wave had an amplitude T_ ~ 10 K, a dominant horizontal wavelength ~40 km, achieved a momentum flux exceeding 300 m2 s-2, and eventually exhibited instability and breaking at the OH altitude. This case of deep mountain wave propagation demonstrates the potential for strong responses in the mesosphere arising from a small source under suitable propagation conditions and suggests that such cases may be more common than previously believed. © 2016. American Geophysical Union. All Rights Reserved.