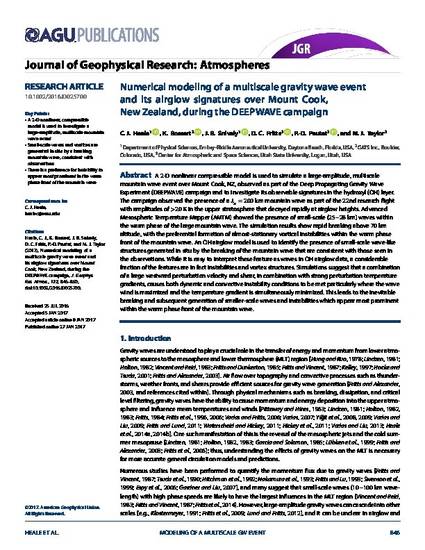 A 2-D nonlinear compressible model is used to simulate a large-amplitude, multiscale mountain wave event over Mount Cook, NZ, observed as part of the Deep Propagating Gravity Wave Experiment (DEEPWAVE) campaign and to investigate its observable signatures in the hydroxyl (OH) layer. The campaign observed the presence of a _x=200ækm mountain wave as part of the 22nd research flight with amplitudes of >20æK in the upper stratosphere that decayed rapidly at airglow heights. Advanced Mesospheric Temperature Mapper (AMTM) showed the presence of small-scale (25_28ækm) waves within the warm phase of the large mountain wave. The simulation results show rapid breaking above 70ækm altitude, with the preferential formation of almost-stationary vortical instabilities within the warm phase front of the mountain wave. An OH airglow model is used to identify the presence of small-scale wave-like structures generated in situ by the breaking of the mountain wave that are consistent with those seen in the observations. While it is easy to interpret these feature as waves in OH airglow data, a considerable fraction of the features are in fact instabilities and vortex structures. Simulations suggest that a combination of a large westward perturbation velocity and shear, in combination with strong perturbation temperature gradients, causes both dynamic and convective instability conditions to be met particularly where the wave wind is maximized and the temperature gradient is simultaneously minimized. This leads to the inevitable breaking and subsequent generation of smaller-scale waves and instabilities which appear most prominent within the warm phase front of the mountain wave. ©2017. American Geophysical Union. All Rights Reserved.