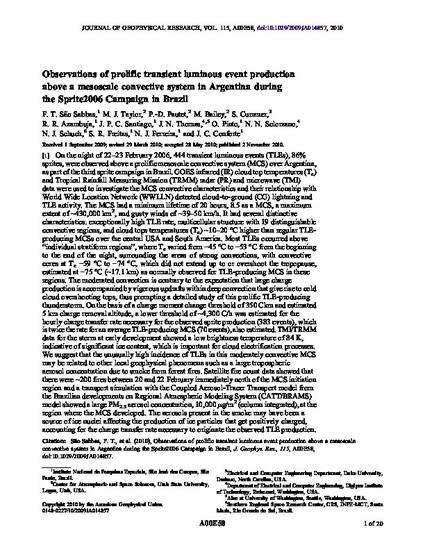 On the night of 22–23 February 2006, 444 transient luminous events (TLEs), 86% sprites, were observed above a prolific mesoscale convective system (MCS) over Argentina, as part of the third sprite campaign in Brazil. GOES infrared (IR) cloud top temperatures (Tc) and Tropical Rainfall Measuring Mission (TRMM) radar (PR) and microwave (TMI) data were used to investigate the MCS convective characteristics and their relationship with World Wide Location Network (WWLLN) detected cloud‐to‐ground (CG) lightning and TLE activity. The MCS had a minimum lifetime of 20 hours, 8.5 as a MCS, a maximum extent of ∼430,000 km2, and gusty winds of ∼39–50 km/h. It had several distinctive characteristics: exceptionally high TLE rate, multicellular structure with 19 distinguishable convective regions, and cloud tops temperatures (Tc) ∼10–20 °C higher than regular TLEproducing MCSs over the central USA and South America. Most TLEs occurred above “individual stratiform regions”, where Tc varied from −45 °C to −53 °C from the beginning to the end of the night, surrounding the areas of strong convections, with convective cores at Tc −59 °C to −74 °C, which did not extend up to or overshoot the tropopause, estimated at −75 °C (∼17.1 km) as normally observed for TLE‐producing MCS in these regions. The moderated convection is contrary to the expectation that large charge production is accompanied by vigorous updrafts within deep convection that give rise to cold cloud overshooting tops, thus prompting a detailed study of this prolific TLE‐producing thunderstorm. On the basis of a charge moment change threshold of 350 Ckm and estimated 5 km charge removal altitude, a lower threshold of ∼4,300 C/h was estimated for the hourly charge transfer rate necessary for the observed sprite production (383 events), which is twice the rate for an average TLE‐producingMCS (70 events), also estimated.TMI/TRMM data for the storm at early development showed a low brightness temperature of 84 K, indicative of significant ice content, which is important for cloud electrification processes. We suggest that the unusually high incidence of TLEs in this moderately convective MCS may be related to other local geophysical phenomena such as a large tropospheric aerosol concentration due to smoke from forest fires. Satellite fire count data showed that there were ∼200 fires between 20 and 22 February immediately north of the MCS initiation region and a transport simulation with the Coupled Aerosol‐Tracer Transport model from the Brazilian developments on Regional Atmospheric Modeling System (CATT/BRAMS) model showed a large PM2.5 aerosol concentration, 10,000 mg/m2 (column integrated), at the region where the MCS developed. The aerosols present in the smoke may have been a source of ice nuclei affecting the production of ice particles that get positively charged, accounting for the charge transfer rate necessary to originate the observed TLE production.