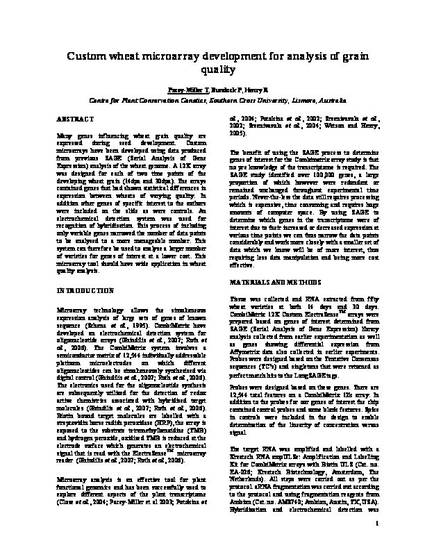 Many genes influencing wheat grain quality are expressed during seed development. Custom microarrays have been developed using data produced from previous SAGE (Serial Analysis of Gene Expression) analysis of the wheat genome. A 12K array was designed for each of two time points of the developing wheat grain (14dpa and 30dpa). The arrays contained genes that had shown statistical differences in expression between wheats of varying quality. In addition other genes of specific interest to the authors were included on the slide as were controls. An electrochemical detection system was used for recognition of hybridisation. This process of including only variable genes narrowed the number of data points to be analysed to a more manageable number. This system can therefore be used to analyse a larger number of varieties for genes of interest at a lower cost. This microarray tool should have wide application in wheat quality analysis.