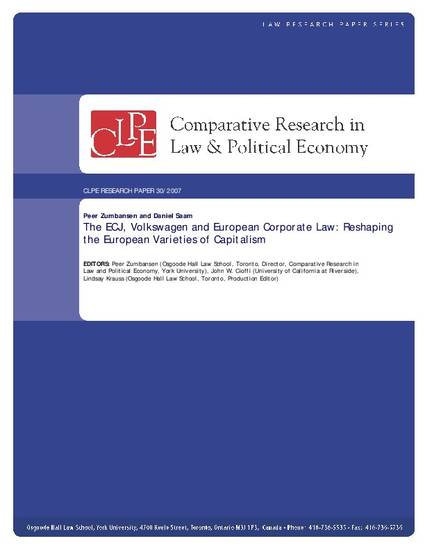 On 23 October 2007, the European Court of Justice handed down its much-awaited Volkswagen decision (Case C-112/2005), following a suit launched by the Commission against the Federal Republic of Germany in 2005. The Volkswagen statute, through which first the Federal government together with the Land (federal state) of Niedersachsen (Lower Saxony), later only Lower Saxony, had reserved a veto against majority acquisition while only holding a fifth of all shares, had come into the Commission's purview as part of its large-scale attempts at reforming and modernizing European company law. The preparatory steps in that regard had been the suits brought by the Commission with regard to other, 'golden share' provisions under Portuguese, French, Belgian and English company laws in recent years. Yet, the Volkswagen decision of the ECJ is of interest in more than one respect. Not only does it constitute a continuation and further accentuation of a line of argument that the Court has been unfolding over past few years with regard to the Member State provisions in conflict with the EC's guarantee of the free movement of capital as laid down in Art. 56 EC. In addition, the impact of the ECJ's new ruling will have to be assessed in the context of a high-powered regulatory field, in which member states, the Commission, and the Court have been finding themselves in an ongoing negotiation and contestation of historically grown company law regimes and the pressures of globalizing capital markets. In that regard, the Volkswagen decision raises a host of questions relating to the Commission's future agenda of corporate governance reform on the one hand and the persisting differences among member states' corporate law regimes on the other. The following article lays out the Court's reasoning, before observing both the immediate and the more long-term effect of the decision.