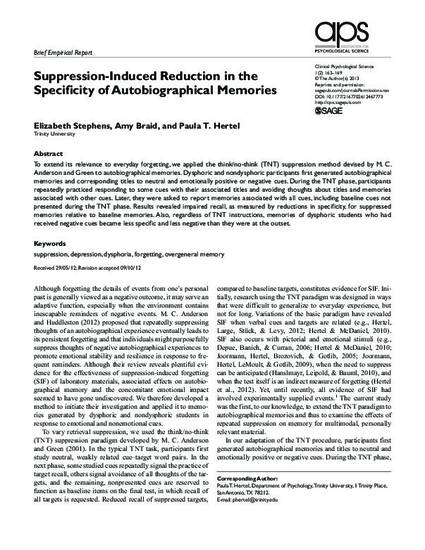 To extend its relevance to everyday forgetting, we applied the think/no-think (TNT) suppression method devised by Anderson and Green (2001) to autobiographical memories. Dysphoric and nondysphoric participants first generated autobiographical memories and corresponding titles to neutral and emotionally positive or negative cues. During the TNT phase, participants repeatedly practiced responding to some cues with their associated titles and avoiding thoughts about titles and memories associated with other cues. Later, they were asked to report memories associated with all cues, including baseline cues not presented during the TNT phase. Results revealed impaired recall, as measured by reductions in specificity, for suppressed memories relative to baseline memories. Also, regardless of TNT instructions, memories of dysphoric students who had received negative cues became less specific and less negative than they were at the outset.