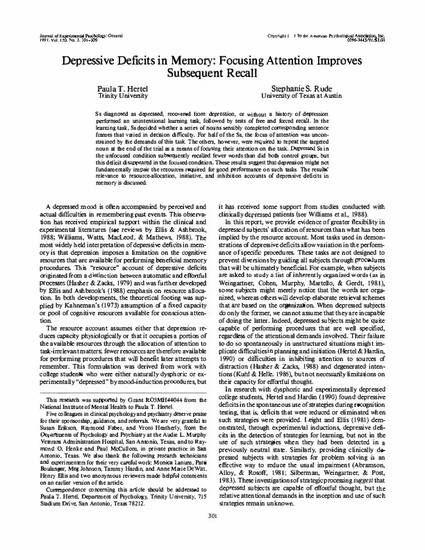 58 Ss (aged up to 55 yrs) diagnosed as depressed, recovered from depression, or without a history of depression performed an unintentional learning task, followed by tests of free and forced recall. In the learning task, Ss decided whether a series of nouns sensibly completed corresponding sentence frames that varied in decision difficulty. For half of the Ss, the focus of attention was unconstrained by the demands of this task. The others, however, were required to repeat the targeted noun at the end of the trial as a means of focusing their attention on the task. Depressed Ss in the unfocused condition subsequently recalled fewer words than did both control groups, but this deficit disappeared in the focused condition. These results suggest that depression might not fundamentally impair the resources required for good performance on such tasks. The results' relevance to resource-allocation, initiative, and inhibition accounts of depressive deficits in memory is discussed.