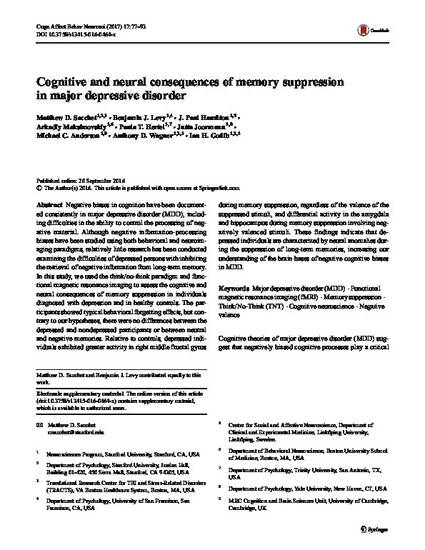 Negative biases in cognition have been documented consistently in major depressive disorder (MDD), including difficulties in the ability to control the processing of negative material. Although negative information-processing biases have been studied using both behavioral and neuroimaging paradigms, relatively little research has been conducted examining the difficulties of depressed persons with inhibiting the retrieval of negative information from long-term memory. In this study, we used the think/no-think paradigm and functional magnetic resonance imaging to assess the cognitive and neural consequences of memory suppression in individuals diagnosed with depression and in healthy controls. The participants showed typical behavioral forgetting effects, but contrary to our hypotheses, there were no differences between the depressed and nondepressed participants or between neutral and negative memories. Relative to controls, depressed individuals exhibited greater activity in right middle frontal gyrus during memory suppression, regardless of the valence of the suppressed stimuli, and differential activity in the amygdala and hippocampus during memory suppression involving negatively valenced stimuli. These findings indicate that depressed individuals are characterized by neural anomalies during the suppression of long-term memories, increasing our understanding of the brain bases of negative cognitive biases in MDD.