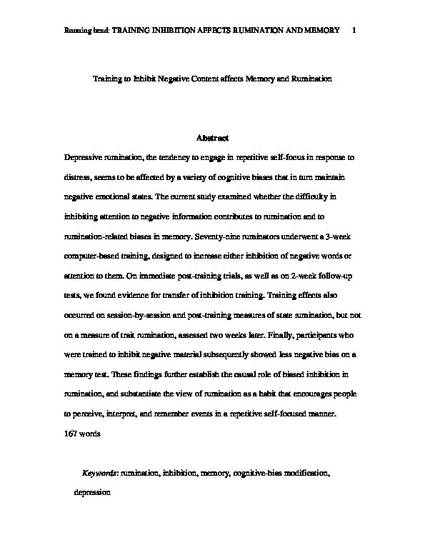 Depressive rumination, the tendency to engage in repetitive self-focus in response to distress, seems to be affected by a variety of cognitive biases that in turn maintain negative emotional states. The current study examined whether the difficulty in inhibiting attention to negative information contributes to rumination and to rumination-related biases in memory. Seventy-nine ruminators underwent a 3-week computer-based training, designed to increase either inhibition of negative words or attention to them. On immediate post-training trials, as well as on 2-week follow-up tests, we found evidence for transfer of inhibition training. Training effects also occurred on session-by-session and post-training measures of state rumination, but not on a measure of trait rumination, assessed 2 weeks later. Finally, participants who were trained to inhibit negative material subsequently showed less negative bias on a memory test. These findings further establish the causal role of biased inhibition in rumination, and substantiate the view of rumination as a habit that encourages people to perceive, interpret, and remember events in a repetitive self-focused manner.