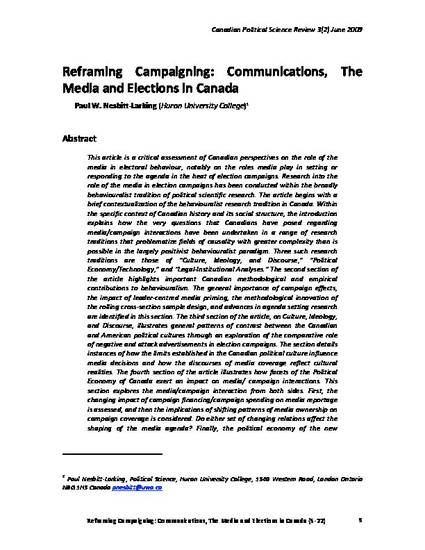 This article is a critical assessment of Canadian perspectives on the role of the media in electoral behaviour, notably on the roles media play in setting or responding to the agenda in the heat of election campaigns. Research into the role of the media in election campaigns has been conducted within the broadly behaviouralist tradition of political scientific research. The article begins with a brief contextualization of the behaviouralist research tradition in Canada. Within the specific context of Canadian history and its social structure, the introduction explains how the very questions that Canadians have posed regarding media/campaign interactions have been undertaken in a range of research traditions that problematize fields of causality with greater complexity than is possible in the largely positivist behaviouralist paradigm. Three such research traditions are those of “Culture, Ideology, and Discourse,” “Political Economy/Technology,” and “Legal-Institutional Analyses.” The second section of the article highlights important Canadian methodological and empirical contributions to behaviouralism. The general importance of campaign effects, the impact of leader-centred media priming, the methodological innovation of the rolling cross-section sample design, and advances in agenda setting research are identified in this section. The third section of the article, on Culture, Ideology, and Discourse, illustrates general patterns of contrast between the Canadian and American political cultures through an exploration of the comparative role of negative and attack advertisements in election campaigns. This section illustrates instances of how the limits established in the Canadian political culture influence media decisions and how the discourses of media coverage reflect cultural realities. The fourth section of the article illustrates how facets of the Political Economy of Canada exert an impact on media/ campaign interactions. This section explores the media/campaign interaction from both sides. First, the changing impact of campaign financing/campaign spending on media reportage is assessed, and then the implications of shifting patterns of media ownership on campaign coverage is considered. Do either set of changing relations affect the shaping of the media agenda? Finally, the political economy of the new Information and Communications Technologies is investigated in the context of the Toronto School of Communication. The fifth and final section of the article undertakes the task of situating media/campaign interactions within the Legal-Institutional regulatory context of the Canadian state. The impact of the Canada Elections Act and other legislation is undertaken around matters such as freedom of expression, access to information, advertising, spending, and public support for political parties and candidates.