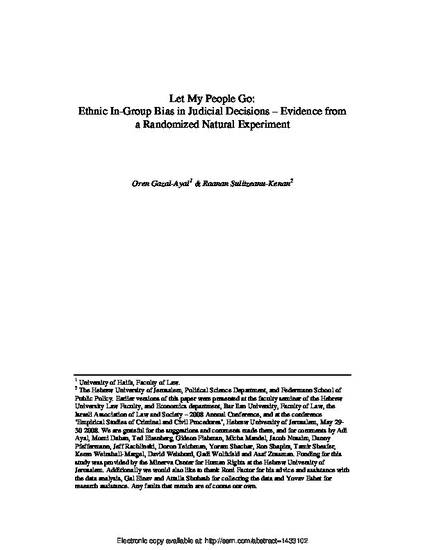 Does ethnic identity affect judicial decisions? We provide new evidence on ethnic biases in judicial behavior, by examining the decisions of Arab and Jewish judges in first bail hearings of Arab and Jewish suspects in Israeli courts. Our setting avoids the potential bias from unobservable case characteristics by exploiting the random assignment of judges to cases during weekends, and by focusing on the difference in ethnic disparity between Arab and Jewish judges. The study concentrates on the early-stage decisions in the judicial criminal process, controlling for the state's position, and excluding agreements, thereby allowing us to distinguish judicial bias from other sources of ethnic disparities. We find systematic evidence of in-group (same ethnic group) bias in detention decisions. However, in cases where the decision is to detain, no ethnic bias was found in the length of the detention. Possible interpretations and implications of these findings are discussed.