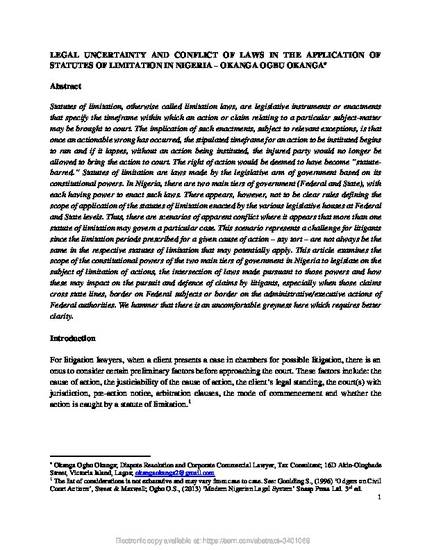 Statutes of limitation, otherwise called limitation laws, are legislative instruments or enactments that specify the timeframe within which an action or claim relating to a particular subject-matter may be brought to court. The implication of such enactments, subject to relevant exceptions, is that once an actionable wrong has occurred, the stipulated timeframe for an action to be instituted begins to run and if it lapses, without an action being instituted, the injured party would no longer be allowed to bring the action to court. The right of action would be deemed to have become “statute-barred.” Statutes of limitation are laws made by the legislative arm of government based on its constitutional powers. In Nigeria, there are two main tiers of government (Federal and State), with each having power to enact such laws. There appears, however, not to be clear rules defining the scope of application of the statutes of limitation enacted by the various legislative houses at Federal and State levels. Thus, there are scenarios of apparent conflict where it appears that more than one statute of limitation may govern a particular case. This scenario represents a challenge for litigants since the limitation periods prescribed for a given cause of action – say tort – are not always be the same in the respective statutes of limitation that may potentially apply. This article examines the scope of the constitutional powers of the two main tiers of government in Nigeria to legislate on the subject of limitation of actions, the intersection of laws made pursuant to those powers and how these may impact on the pursuit and defence of claims by litigants, especially when those claims cross state lines, border on Federal subjects or border on the administrative/executive actions of Federal authorities. We hammer that there is an uncomfortable greyness here which requires better clarity.

Citation Information
Okanga Ogbu Okanga, “Legal Uncertainty and Conflict of Laws in the Application of Statutes of Limitation in Nigeria” (2019) [unpublished].