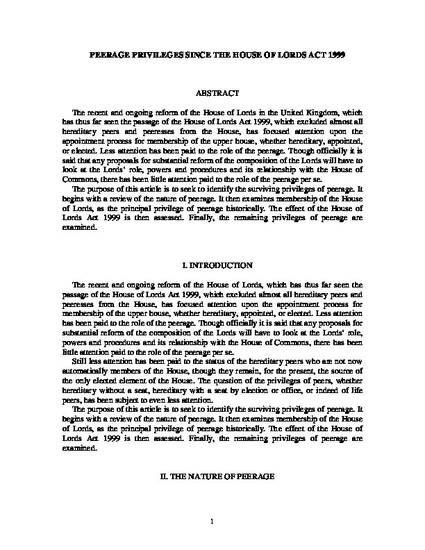 The recent and ongoing reform of the House of Lords in the United Kingdom, which has thus far seen the passage of the House of Lords Act 1999, which excluded almost all hereditary peers and peeresses from the House, has focused attention upon the appointment process for membership of the upper house, whether hereditary, appointed, or elected. Less attention has been paid to the role of the peerage. Though officially it is said that any proposals for substantial reform of the composition of the Lords will have to look at the Lords’ role, powers and procedures and its relationship with the House of Commons, there has been little attention paid to the role of the peerage per se. The purpose of this article is to seek to identify the surviving privileges of peerage. It begins with a review of the nature of peerage. It then examines membership of the House of Lords, as the principal privilege of peerage historically. The effect of the House of Lords Act 1999 is then assessed. Finally, the remaining privileges of peerage are examined.