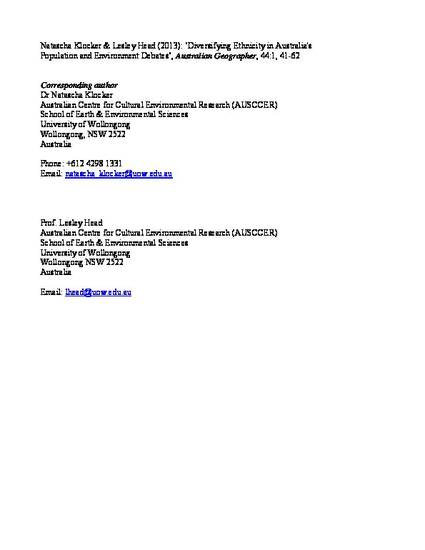 Abstract
Population–environment debates in Australia are at an impasse. While the ability of this continent to sustain more migrants has attracted persistent scrutiny, nuanced explorations of diverse migrant cultures and their engagements with Australian landscapes have scarcely begun. Yet as we face the challenges of a climate changing world we would undoubtedly benefit from the most varied knowledges we can muster. This paper brings together three arenas of environmental debate circulating in Australia—the immigration/carrying capacity debate, comparisons between Indigenous and Anglo-European modes of environmental interaction, and research on household sustainability dilemmas—to demonstrate the exclusionary tendencies of each. We then attempt to reorient them in productive ways, by attending to the complexity of environmental sustainability in a context of immense ethnic diversity. Attentiveness to ethnic diversity offers three important insights: (1) Anglo-European Australian understandings of nature and environmentalism are culturally specific, but other perspectives are possible; (2) tensions can arise when ethnic differences in environmental attitude or practice come into contact; and (3) cultural environmental research offers scope to identify ethnically diverse vernacular sustainability practices that should be supported. Each of these threads requires attention in a context where population–environment debates often overlook cultural complexity, and readily spiral into strident anti-immigration sentiments.
Citation Information
Natascha Klocker and Lesley Head. "Diversifying ethnicity in Australia's population and environment debates" (2013)
Available at: http://works.bepress.com/nklocker/15/