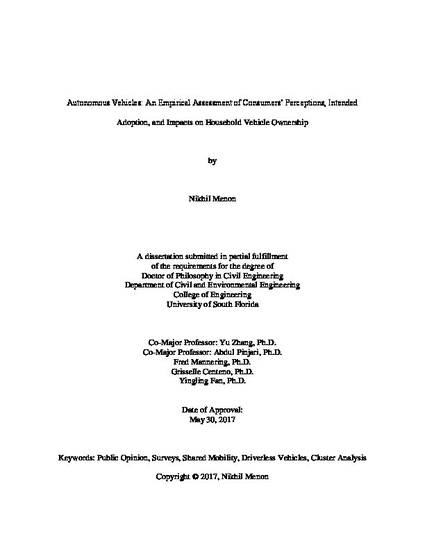 Emerging automotive and transportation technologies have provided revolutionary possibilities in the way we might travel in the future. Major car manufacturers and technology giants have demonstrated significant progress in advancing and testing autonomous vehicles in real-life traffic conditions. Governmental agencies are grappling with how to plan transportation systems for a world with autonomous vehicles. Past research has shown that not all technologies are immediately welcomed by the public. Autonomous Vehicles would have to likely go through a similar phase, and would need to overcome not just technological challenges but also social barriers for successful penetration into the marketplace. Most previous studies on consumer opinions, and potential adoption of these technologies provide only descriptive, univariate analyses that fail to extract deeper insights on consumers’ perceptions, and their intended adoption of autonomous vehicles.