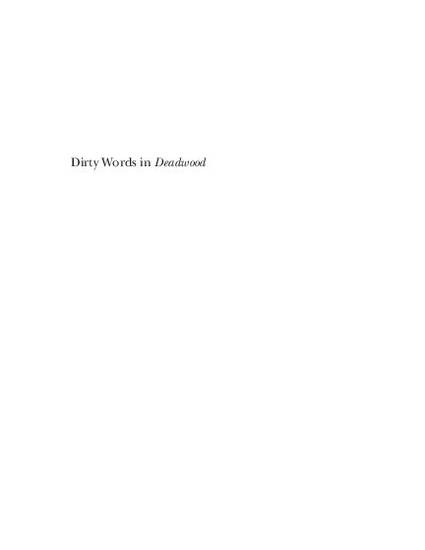 © 2013 by the Board of Regents of the University of Nebraska.

Abstract
Dirty Words in “Deadwood” showcases literary analyses of the Deadwood television series by leading western American literary critics. Whereas previous reaction to the series has largely addressed the question of historical accuracy rather than intertextuality or literary complexity, Melody Graulich and Nicolas S. Witschi’s edited volume brings a much-needed perspective to Deadwood’s representation of the frontier West. As Graulich observes in her introduction: “With its emotional coherence, compelling characterizations, compressed structural brilliance, moral ambiguity, language experiments, interpretation of the past, relevance to the present, and engagement with its literary forebears, Deadwood is an aesthetic triumph as historical fiction and, like much great literature, makes a case for the humanistic value of storytelling.” From previously unpublished interviews with series creator David Milch to explorations of sexuality, disability, cinematic technique, and western narrative, this collection focuses on Deadwood as a series ultimately about the imagination, as a verbal and visual construct, and as a literary masterpiece that richly rewards close analysis and interpretation.
Citation Information
Melody Graulich and Nicolas S. Witschi. Dirty Words in Deadwood. (2013)
Available at: http://works.bepress.com/nicolas_witschi/42/