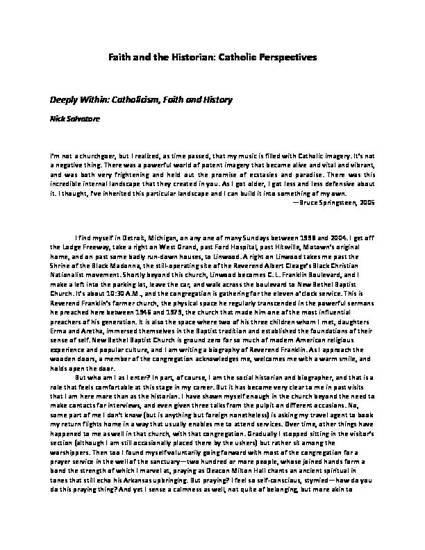 Other
Deeply Within: Catholicism, Faith and History
Articles and Chapters
Download
Publication Date
Disciplines
Abstract
[Excerpt] In the decade I spent living with Gene Debs, I thought much about faith's relation to intellect, especially in the political realm. It was not just that a socialist in capitalist America needed faith but rather that Debs's very vision of America's promise was itself a profound act of faith. But with the exception of the last chapter, which I titled, "A Species of Purging," following a phrase in one of Debs's prison letters, overt discussion of any religious sensibility was largely sotto voce, echoes of a private dialogue with myself. Pleased as I was with the book when finished, I also knew I needed to return to this issue of religion. For I had done enough reading by 1982 to realize that no serious history of American people could be written that did not take into account the religious sensibilities of the individual or group under discussion. But rather than engage that idea directly, I promptly ran from it, polishing in the process a series of feints and spins as I worked out how I might continue as both a biographer and a social historian. Despite this complicated avoidance strategy, I would soon discover that my next biographical companion would insist that I explore anew this issue of faith.
Comments