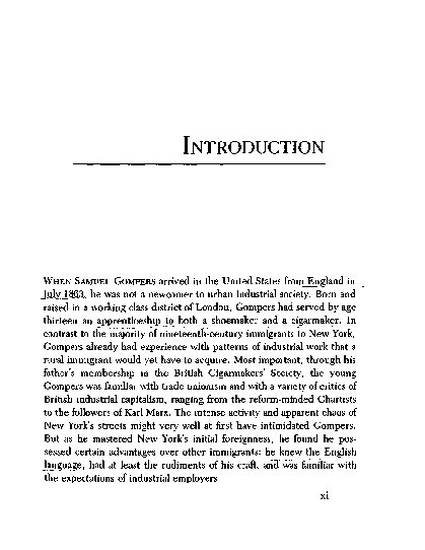 Other
Introduction to Seventy Years of Life and Labor: An Autobiography
Articles and Chapters
Download
Publication Date
Disciplines
Abstract
[Excerpt] Samuel Gompers remains a central figure in American history during the society's most intense capital development. The choices he made from the possibilities he perceived were of great importance at the time and still influence the organization he founded. Despite his many achievements, however, the larger aspects of the qualities of his leadership remained weak. In his search for acceptance, he jettisoned the vision of working class unity that had motivated him in the 1870s and 1880s. The K of L slogan, that "an injury to one is the concern of all," Gompers dismissed, a casualty of the polemics of the 1880s. But he might have listened to the words of a personal hero, Abraham Lincoln, who once commented that "the strongest bond of human sympathy, outside of the family relation, should be one uniting all working people, of all nations, and tongues, and kindreds." Had Samuel Gompers been able to discover the power and vitality of that American tradition, and joined to it his exemplary abilities as an organizer and administrator, his achievements and his legacy to succeeding generations might have been even more impressive.
Comments