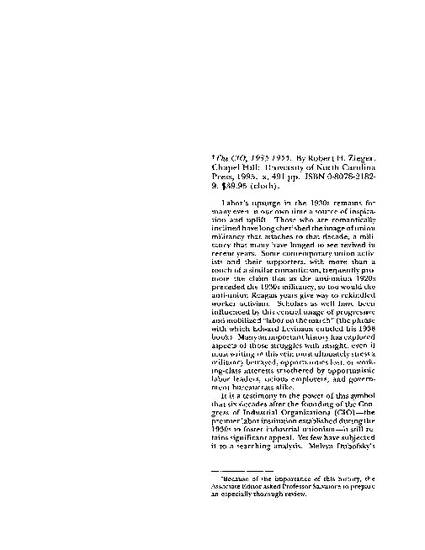 Other
[Review of the Book The CIO, 1935-1955]
Articles and Chapters
Download
Publication Date
Disciplines
Abstract
[Excerpt] Labor's upsurge in the 1930s remains for many even in our own time a source of inspiration and uplift. Those who are romantically inclined have long cherished the image of union militancy that attaches to that decade, a militancy that many have longed to see revived in recent years. Some contemporary union activists and their supporters, with more than a touch of a similar romanticism, frequently promote the claim that as the anti-union 1920s preceded the 1930s militancy, so too would the anti-union Reagan years give way to rekindled worker activism. Scholars as well have been influenced by this central image of progressive and mobilized "labor on the march" (the phrase with which Edward Levinson entitled his 1938 book). Many an important history has explored aspects of those struggles with insight, even if most writing in this vein must ultimately stress a militancy betrayed, opportunities lost, or working-class interests smothered by opportunistic labor leaders, vicious employers, and government bureaucrats alike. It is a testimony to the power of this symbol that six decades after the founding of the Congress of Industrial Organizations (CIO)-the premier labor institution established during the 1930s to foster industrial unionism-it still retains significant appeal. Yet few have subjected it to a searching analysis. Melvyn Dubofsky's 1979 article (in the journal Amerikastudien), with its provocative evocation of the "not so turbulent Thirties," was, until recently, the exception. Nor has any historian attempted to understand the whole of the CIO's institutional life, from its inception in those "glory years" down through its merger with its erstwhile implacable foe, the American Federation of Labor (AFL), in 1955. To write such a broad history is the task Robert H. Zieger undertakes in this book. Although there are grounds for disagreement and debate, Zieger has written a book of serious scholarship, based on a career-long immersion in archival and secondary sources, a book, moreover, that is replete with new insights, sound judgments, and a solid interpretative framework. It will serve as the standard interpretation for decades to come.
Comments