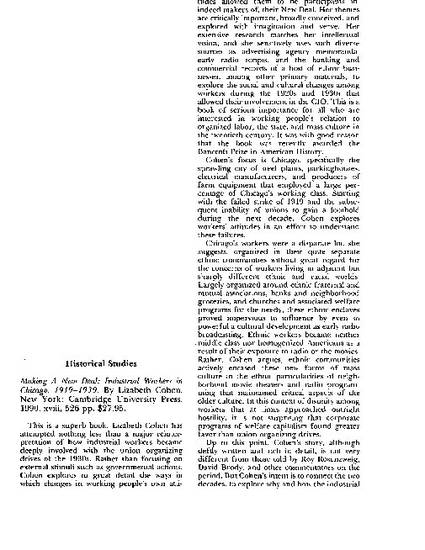 Other
[Review of the Book Making a New Deal: Industrial Workers in Chicago, 1919-1939]
Articles and Chapters
Download
Publication Date
Disciplines
Abstract
[Excerpt] This is a superb book. Lizabeth Cohen has attempted nothing less than a major reinterpretation of how industrial workers became deeply involved with the union organizing drives of the 1930s. Rather than focusing on external stimuli such as governmental actions, Cohen explores in great detail the ways in which changes in working people's own attitudes allowed them to be participants in, indeed makers of, their New Deal. Her themes are critically important, broadly conceived, and explored with imagination and verve. Her extensive research matches her intellectual vision, and she sensitively uses such diverse sources as advertising agency memoranda, early radio scripts, and the banking and commercial records of a host of ethnic businesses, among other primary materials, to explore the social and cultural changes among workers during the 1920s and 1930s that allowed their involvement in the CIO. This is a book of serious importance for all who are interested in working people's relation to organized labor, the state, and mass culture in the twentieth century. It was with good reason that the book was recently awarded the Bancroft Prize in American History.
Comments