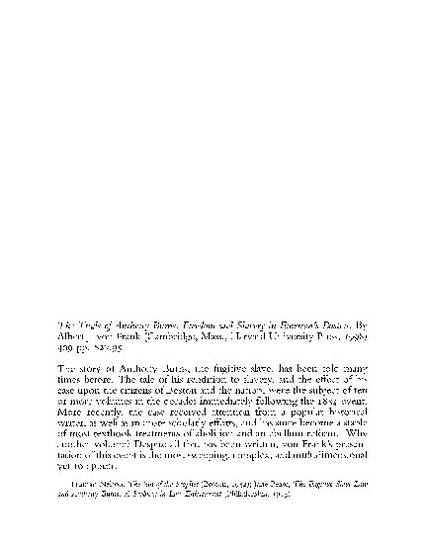 Other
[Review of the Book The Trials of Anthony Burns: Freedom and Slavery in Emerson's Boston]
Articles and Chapters
Download
Publication Date
Disciplines
Abstract
[Excerpt] The intellectual core of The Trials of Anthony Burns explores the connection between Ralph Waldo Emerson and the New England Transcendentalists and the abolitionist cause. Ideas effect social life, von Frank insists, and he examines that point in a rich analysis that weaves intellectual, religious, political, and cultural perspectives into a sophisticated and detailed narrative. Emersonians came to embrace abolitionist activity as a central component of their philosophical idealism, particularly during the i850s. In an interesting way, the Burns case called upon many of New England's social and cultural elites to rethink their understanding of the relationship between idea and action, much as, two decades earlier, Charles Grandison Finney's revivals encouraged many to re-imagine the play between private morality and public life.
Comments

Citation Information
Nick Salvatore. "[Review of the Book The Trials of Anthony Burns: Freedom and Slavery in Emerson's Boston]" (1999)
Available at: http://works.bepress.com/nick_salvatore1/10/