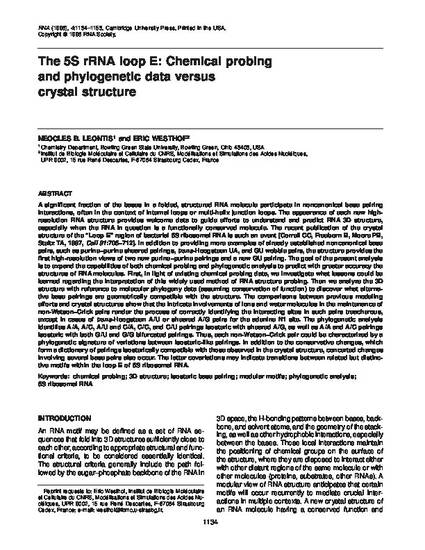 A significant fraction of the bases in a folded, structured RNA molecule participate in noncanonical base pairing interactions, often in the context of internal loops or multi-helix junction loops. The appearance of each new high-resolution RNA structure provides welcome data to guide efforts to understand and predict RNA 3D structure, especially when the RNA in question is a functionally conserved molecule. The recent publication of the crystal structure of the "Loop E" region of bacterial 5S ribosomal RNA is such an event [Correll CC, Freeborn B, Moore PB, Steitz TA, 1997, Cell 91:705-712]. In addition to providing more examples of already established noncanonical base pairs, such as purine-purine sheared pairings, trans-Hoogsteen UA, and GU wobble pairs, the structure provides the first high-resolution views of two new purine-purine pairings and a new GU pairing. The goal of the present analysis is to expand the capabilities of both chemical probing and phylogenetic analysis to predict with greater accuracy the structures of RNA molecules. First, in light of existing chemical probing data, we investigate what lessons could be learned regarding the interpretation of this widely used method of RNA structure probing. Then we analyze the 3D structure with reference to molecular phylogeny data (assuming conservation of function) to discover what alternative base pairings are geometrically compatible with the structure. The comparisons between previous modeling efforts and crystal structures show that the intricate involvements of ions and water molecules in the maintenance of non-Watson-Crick pairs render the process of correctly identifying the interacting sites in such pairs treacherous, except in cases of trans-Hoogsteen A/U or sheared A/G pairs for the adenine N1 site. The phylogenetic analysis identifies A/A, A/G, A/U and CIA, C/C, and C/U pairings isosteric with sheared A/G, as well as A/A and A/C pairings isosteric with both G/U and G/G bifurcated pairings. Thus, each non-Watson-Crick pair could be characterized by a phylogenetic signature of variations between isosteric-like pairings. In addition to the conservative changes, which form a dictionary of pairings isosterically compatible with those observed in the crystal structure, concerted changes involving several base pairs also occur. The latter covariations may indicate transitions between related but distinctive motifs within the loop E of 5S ribosomal RNA.