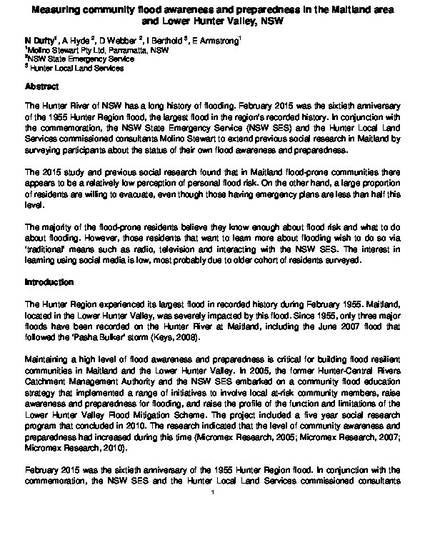 The Hunter River of NSW has a long history of flooding. February 2015 was the sixtieth anniversary of the 1955 Hunter Region flood, the largest flood in the region’s recorded history. In conjunction with the commemoration, the NSW State Emergency Service (NSW SES) and the Hunter Local Land Services commissioned consultants Molino Stewart to extend previous social research in Maitland by surveying participants about the status of their own flood awareness and preparedness. The 2015 study and previous social research found that in Maitland flood-prone communities there appears to be a relatively low perception of personal flood risk. On the other hand, a large proportion of residents are willing to evacuate, even though those having emergency plans are less than half this level. The majority of the flood-prone residents believe they know enough about flood risk and what to do about flooding. However, those residents that want to learn more about flooding wish to do so via ‘traditional’ means such as radio, television and interacting with the NSW SES. The interest in learning using social media is low, most probably due to older cohort of residents surveyed.